When I was in Ireland four years ago we never got to go over the rope bridge that extends across a gully and over to a small island where there was in fact a small house which served as the base camp for a Salmon fishing business. I believe it was closed then due to the weather and/or the time of year. But we were lucky this year and managed to go down the path from which there are some awesome views of the coastline and then across the ropebridge.

I must admit when I first traveled over this bridge as it bounced and swayed I had to catch my breath. And while the sign clearly says that there should be no more than 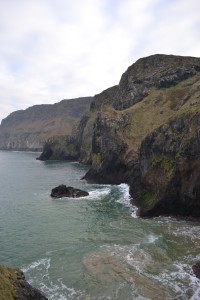 The picture on the left shows what’s on the other side of the bridge and just round the corner. But look how blue/green the water was on that day. It really was magical on that day.

It seems to me that Chester was able to get across that bridge much better than I although neither of us fell off or into the water. I can only imagine that that water is quite cold.

In order to get to the rope bridge we had to go down all these stairs and then of course going back we had to go back up the stairs. When we were at Dun Luce I counted 123 stairs going down to just under the bridge. I think there were 121 more stairs here. It was quite the workout.

After we got back to the car we essentially made a mad dash to get back to Belfast before it got too dark. Chester did a great job with the Sat Nave thing we had in the car despite how difficult it was to get it to recognize just where it was that we were and where it was that we wanted to go. Branden attmepteedd to enter “Home” into it’s memory but when Chester told it to guide us back to their place it said that there was no such place.

We did nevertheless make it back to Belfast unscathed. I was pretty happy that I had driven on the wrong side of the road for three days and never ran into anything. I’d say that that was quite an accomplishment in and of itself.